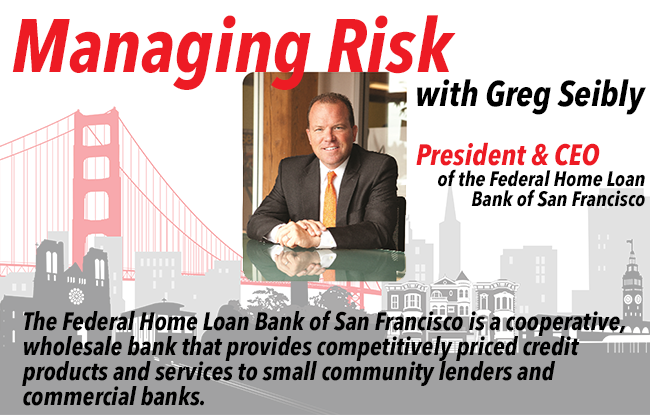 Our November General Membership Luncheon, Managing Risk with the Federal Home Loan Bank of San Francisco, is a unique opportunity to meet Greg Seibly, President and CEO of the FHLB of San Francisco. Greg brings 30 years of banking experience to the party, hailing from US Bank, Sterling and Umpqua where, serving as President of Consumer Banking, he helped to finalize the Umpqua-Sterling merger.

Greg Seibly is President and Chief Executive Officer of the Federal Home Loan Bank of San Francisco. Prior to joining the Bank, he served as President of Consumer Banking at Umpqua Bank from its April 2014 merger with Sterling Financial Corporation (Sterling) until May 2016. From October 2009 to April 2014, he served as President and Chief Executive Officer of Sterling and as a member of the Board of Directors. Before joining Sterling in 2007, he was President of U.S. Bank‐California. He has also held executive‐level positions in commercial banking at Wells Fargo Bank and in healthcare finance at Bank of America. Greg currently serves on the Board of Directors of the Pacific Coast Banking School. He is also a past Board member of both the Washington Bankers Association and the California Bankers Association. Greg holds a B.S. in Finance from Indiana University.